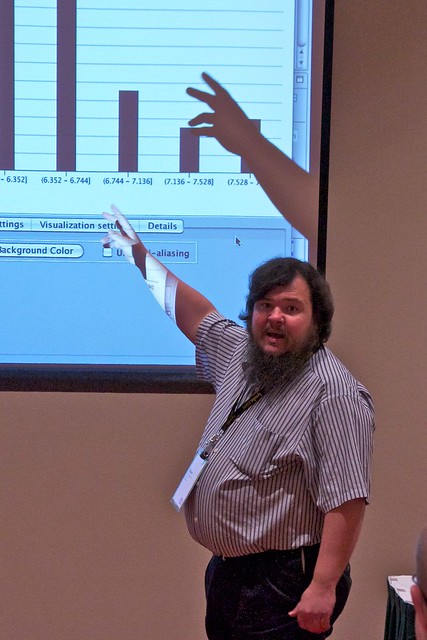 Last week I had the good fortune of getting to hear Ruben Puentedura speak at the 7th annual 21st Century Learning event out here in Hong Kong. My big takeaway: I had seriously misunderstood his SAMR model of tech integration.  In fact, most of my colleagues had also misunderstood it.

If you’r not familiar with it, SAMR stands for Substitution, Augmentation, Modification, and Redefinition. At its simplest, it suggests that when we first begin using a new technology we are often still using it to accomplish the old tasks from before, without much of a change in functionality or in learning outcomes.  As we begin to take advantage of the new technology, we are able to add deeper functionality, enhance learning outcomes, until finally at the end we reach a ‘redefinition level’ where we can accomplish something entirely new that would not have been possible without the use of that technology.

Here is a quick video that more or less sums up that perspective on SAMR:

After explanations of SAMR such as this one, I developed a number of conclusions:

I disagreed with many of these conclusions, and so I was very interested in speaking with Dr. Puentedura to see how might be able to explain them. Last Thursday, 11 Dec 2014, I attended his 6 hour preconference at 21st Century Learning, and when I walked away I realized that all of my conclusions about the SAMR model were in fact misunderstandings.

Myth 1 – the SAMR Model is a hierarchy

During the workshop, we worked in groups to construct what Dr. Puentedura called “SAMR Ladders”.  These ladders took a subject, for example a Middle School unit on WWII history, and then spun out a sequence of lessons that could be crafted around a set of related learning objectives. These objectives focused on the cross section of history pedagogy and historical content knowledge. Click the image below to see the details.

Conclusion 1a: According to SAMR, there may be times when substitution level use of technology is the best use of it.

Conclusion 1b: SAMR is not just a scale of tech integration, but it is also a scale of pedagogic engagement (similar to Bloom’s Taxonomy). In her reflections on SAMR, Kathy Schrock put together the following infographic showing this connection.

Once we begin to understand that SAMR is not just a tech-integration ladder, but also a pedagogic ladder, it raises a natural question: Does SAMR suggest that only tech-integration that reaches ‘redefinition’ levels reach the highest level of Bloom’s Taxonomy?  If so, what about deep, provocative, meaningful tasks that have been a part of education for centuries, far before the advent of digital technologies?

It turns out that SAMR has space in the Redefinition level for lessons that do not seem to have much to do with tech.  Dr. Puentedura mentioned that, oftentimes, three different sorts of lessons reached this level: digital storytelling, real-world problem solving, and deep, thoughtful investigation at a level that would not have been thought possible.  An example he gave of this last type came out of the music curriculum that he was working on. A group of students were able to dive deeply into the realm of historical performance, and with the help of technology were able to give a final performance that would not have been possible otherwise.  Even though this final performance was on historical instruments and had nothing to do with what we would normally think of as technology, because technology made it possible it was still Redefinition.

This music example is a case where the innovative use of technology came at the Augmentation and Modification level, and at the Redefinition level there was little direct use of technology involved. He gave another example in a conversation I had with him after the presentation.  I asked him about schools like Montessori and Waldorf, where students engage in deep levels of inquiry and discovery but without much use of digital technology.  His reply: in many of those cases, these schools are using non-digital technologies in highly innovative ways, and are getting high-level results because of that.

That’s right: a Montessori school that develops a highly innovative, project based, culminating lesson that uses cards or blocks that have existed for centuries might still be a case of Redefinition on the SAMR ladder.

Conclusion 2: SAMR is not looking at tech-integration or a innovative and effective pedagogies in isolation, but rather at the relationship between the two of them.

The day after the preconference I saw Dr. Puentedura’s keynote presentation.  In it, he showed how lessons that scored more highly on the SAMR ladder yielded a far greater improvement in results than lessons at the Substitution level.  The average for Redefinition lessons was around 1.5 standard deviations higher than the average for Substitution, by my recollection. How could this be possible if a Redefinition lesson becomes redefinition not solely by the quality and nature of the lesson itself, but also based on how it builds on previous lessons and depends on previous uses of innovative technology?

I asked Dr. Puentedura this question, and his simple response was that he had looked at the pedagogic context of each of the lessons that he classified and rated it accordingly. What is interesting to me here is that the data was being used as evidence of the high effectiveness of excellent tech-integration. It seems to me that it could also be viewed as evidence for effectiveness of highly engaging lessons that are at the top of Bloom’s Taxonomy. It would be fascinating to see if these two factors even could be disentangled.

Conclusion 3: It’s impossible to walk into a classroom and know what level of tech integration is actually occurring without knowledge of how that lesson fits into the overall unit and curriculum.

This statement only makes sense if one is viewing SAMR purely in terms of tech-integration and not in terms of pedagogy. Once you look at it in terms of pedagogy as well, it becomes obvious that you can never ‘max-out’ a unit. There are always ways that we can be inventive and take the teaching and learning involved to the next level.

Leave a Reply to Dianne Cancel